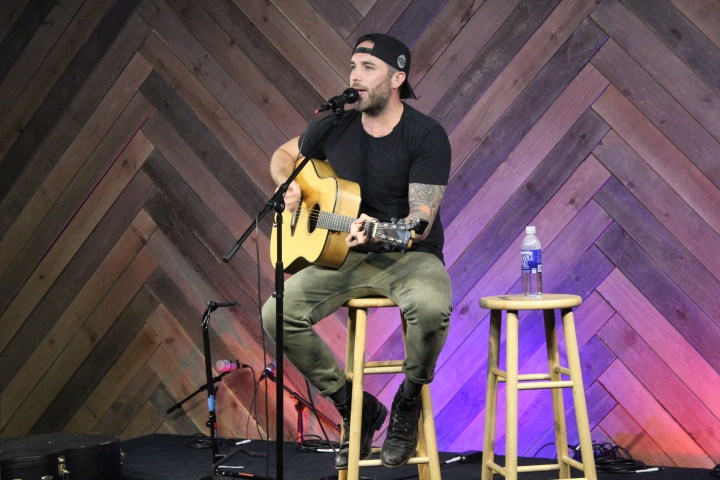 The first time I saw Tyler Rich he was opening up for Dustin Lynch on Long Island, New York in 2015. Now, three years later, he’s making it big signing to Big Machine Music and The Valory Music Co for both publishing and record deals.

I was lucky enough to attend a private show for Tyler thanks to the BIG 98 for hosting this event. What made this show special was that behind Tyler’s success is a story that most people wouldn’t even think of hearing from him. The California native thought nothing of moving down to Nashville until Dustin Lynch saw his 15 seconds cover of his song “Mind Reader” and told him he has what it takes. That’s all Tyler needed to hear. He packed up everything with his roommate and dog. They drove 40 hours straight from California to Nashville just to make it in time for Cinco de Mayo.

Today marks three years since I convinced one of my best friends to help Abby 🐕 and I move 40 hours across the country to Nashville, and we found this Rambo wall along the way 🙌🏼

“That first year in town I was just writing with any and everybody I could possibly meet,” he says. “I wrote a ton of terrible songs and some good ones. Dustin hit me up one day and said listen, I think these are some of your best songs and you should put it into a set and come out and open for me on the Hell Of A Night Tour. It was his first headlining tour that lasted about four months. It wasn’t about having a chance to steal his fans for a second but every weekend he’d take these A-list writers on the road to work. I would meet all these writers and then they became fans. Then all of a sudden, my second year in town I’m writing with the best writers in town.”

That’s when it all started to come together for Tyler. He says he met this guy that nobody has probably heard of, Scott Borchetta, CEO of Big Machine Records. No big deal or anything.

“He met me and became a friend right away. We hit it off. He signed me pretty quick. Just like when I moved here we started the last year writing about 100 songs getting ready for this and we released The Difference about two months ago now. It’s doing really well on the charts, it’s been amazing.”

Tyler’s new single “The Difference” written by Rhett Akins, Devin Dawson, Ben Burgess and Jacob Durrett has been climbing the charts now currently sitting No. 50 on Billboard Country Airplay. Tyler just made his debut on the Today Show, which you can say is just the beginning for him. This is Tyler’s year, just like I mentioned in my Artists To Watch Article. Make sure you keep an eye out for his record & future tour dates. You don’t want miss Tyler’s big break.

There was an error retrieving images from Instagram. An attempt will be remade in a few minutes.